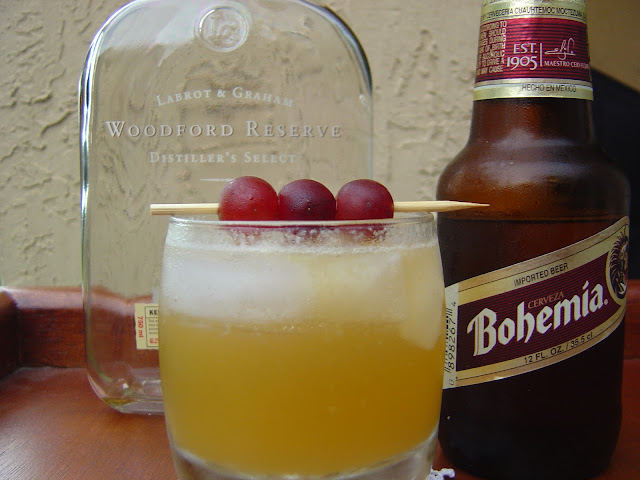 My wife left for a vacation with her mother and cousin in Lisbon and Budapest a little while ago. I decided to take the opportunity to prepare the Bohemia Old-Fashioned cocktail recipe, a twist on the classic drink created by Chef Rick Bayless using Bohemia beer. Rick is of course an author and owner of the award-winning Mexican restaurant Frontera Grill in Chicago. Besides this cocktail, he's also created dozens of other recipes using Bohemia Clasica.

Below is the recipe from his website. I kept mine on the sour end and used the equivalent of what 2 tablespoons of sugar would be here. For bourbon, I used the fabulous Woodford Reserve. This bottle of Bohemia and actually the idea to pursue this recipe was provided to me by their agency. If you're interested in seeing what I think about the beer alone, well that exists too! Finally, I didn't rush out to buy maraschino cherries for a garnish. I just used red seedless grapes.

I found out I'm not very good at juicing limes and in fact did squirt some right into my eye. That was the only mishap though. What a nice drink! Refreshingly bitter with small nibbles of sweetness here and there. Of course the lime really is acidic and a little biting. The bourbon stands out on its own as well, also offering a little sweet relief. And the Bohemia showed some of its grainy characteristics in addition to the nice carbonation. The grape garnish worked well--three crunchy sweet pauses in what turned out to be a fairly bitter drink. Next time I might go a little further with the sugar, perhaps to three tablespoons.

What do you think of my pictures? Better than the professional ones? And let me fill you in on a little secret--it was raining on me when I took them. Check this cocktail out! 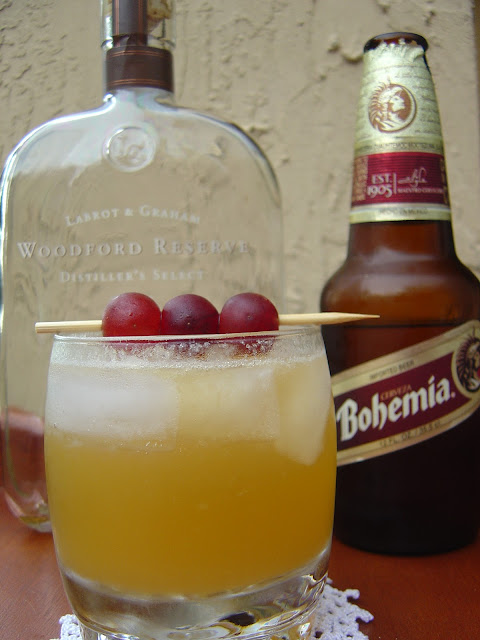 Posted by Distilled Reflections at 8:10 AM