A few months ago, Ed Roberts and I went to see the Ardbeg Rocket and taste some of their whiskies at the launch of Bar Stache in Ft. Lauderdale. Being the program manager for By The Glass Show, Ed connected with Moët Hennesy's Regional Marketing Manager Trisha Cancilla after her presentation. And that brings us to last night's spotlight on the Ardbeg Brand of Islay Single Malt Scotch Whisky.

Trisha got the show started as we opened their Ten Year Old Scotch. She let us know a little about her role with both Ardbeg and sister distillery Glenmorangie as well as a little history. Apparently, though Ardbeg had a long history of making fine whisky, there was a period though the 1980's and 1990's where they made none and the operation fell into disrepair. It was only thanks to the rescue by the Glenmorangie distillery that the Ardbeg name and Scotches exist today. One Master Distiller oversees both distilleries.

One whiff of the Ten Year Old Scotch and we knew why this is known as "The Peatiest Scotch" of them all. Very smoky aroma with some citrus, and that aroma carried through to the palate. The smoke was prominent while the citrus zest was really interesting and tangy. At 46% alcohol, the heat was noticeable but not overpowering. Nice spice, a little oily, a little fruity and hints of vanilla come through as well. 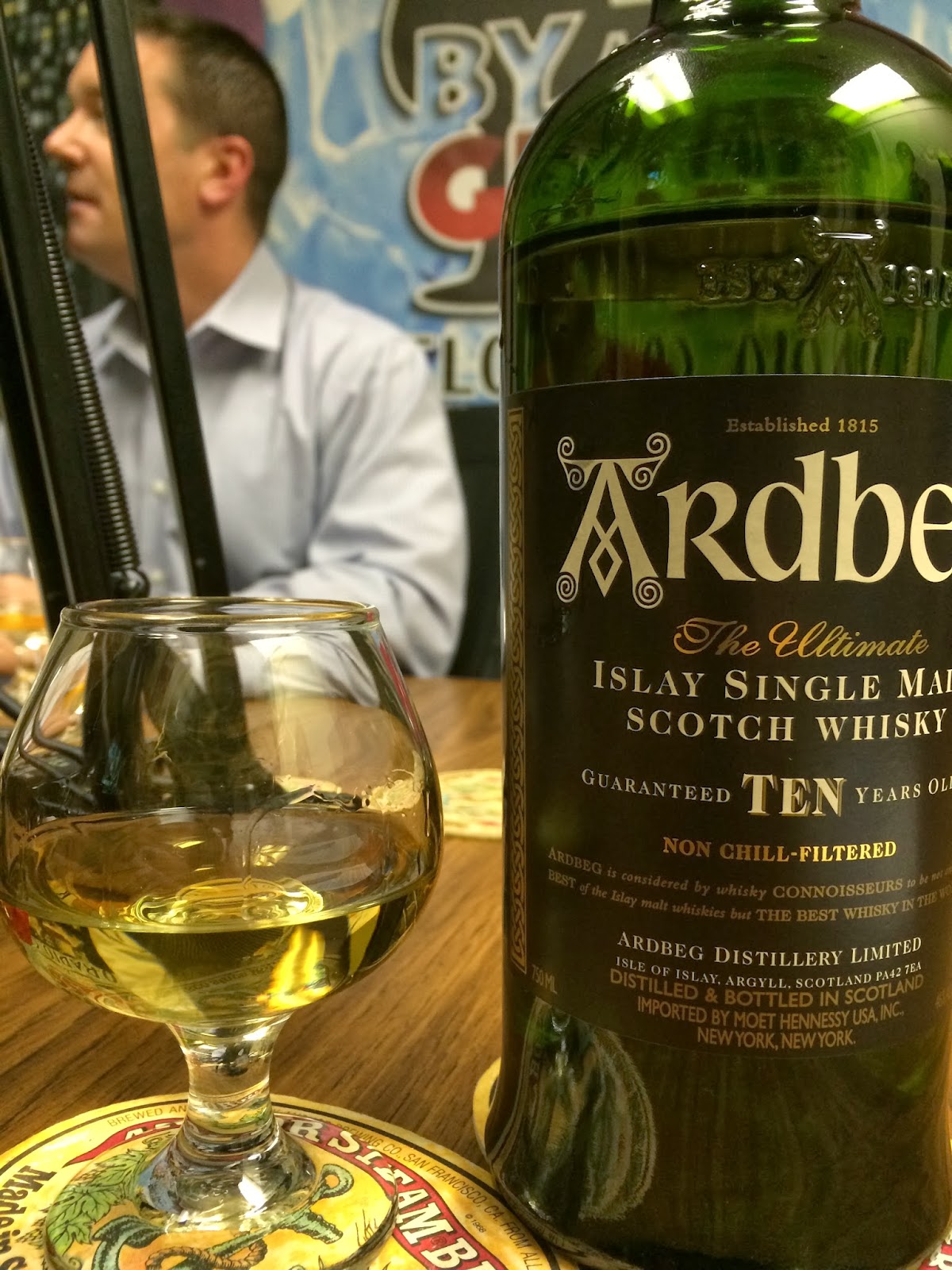 About that time, Global Brand Ambassador for Ardbeg and Glenmorangie David Blackmore called into the show and stayed with us right until the end. David led us in a tasting of three more Scotches while educating us about the brand and distillery.

We started with Ardbeg Uigeadail (Oog-a-dahl), a combination of 60% Bourbon barrel aged Scotch with 40% Sherry barrel aged Scotch. Uigeadail is bottled at full strength 54.2% alcohol. The color was darker than the 10 Year Scotch, and David explained that color comes from the Sherry barrels. Sweet aroma, a little floral with some smoke. Very spicy flavors come first, and along with the alcohol heat take a few sips to become accustomed to. But really nice fruitiness, some wood, smoke and more spice really come together in an awesome way after that. We added a drop of water as well, which softened the heat and really brought out more fruits. One of my favorites and I got to take the rest of the bottle home with me. Thanks, Trisha! 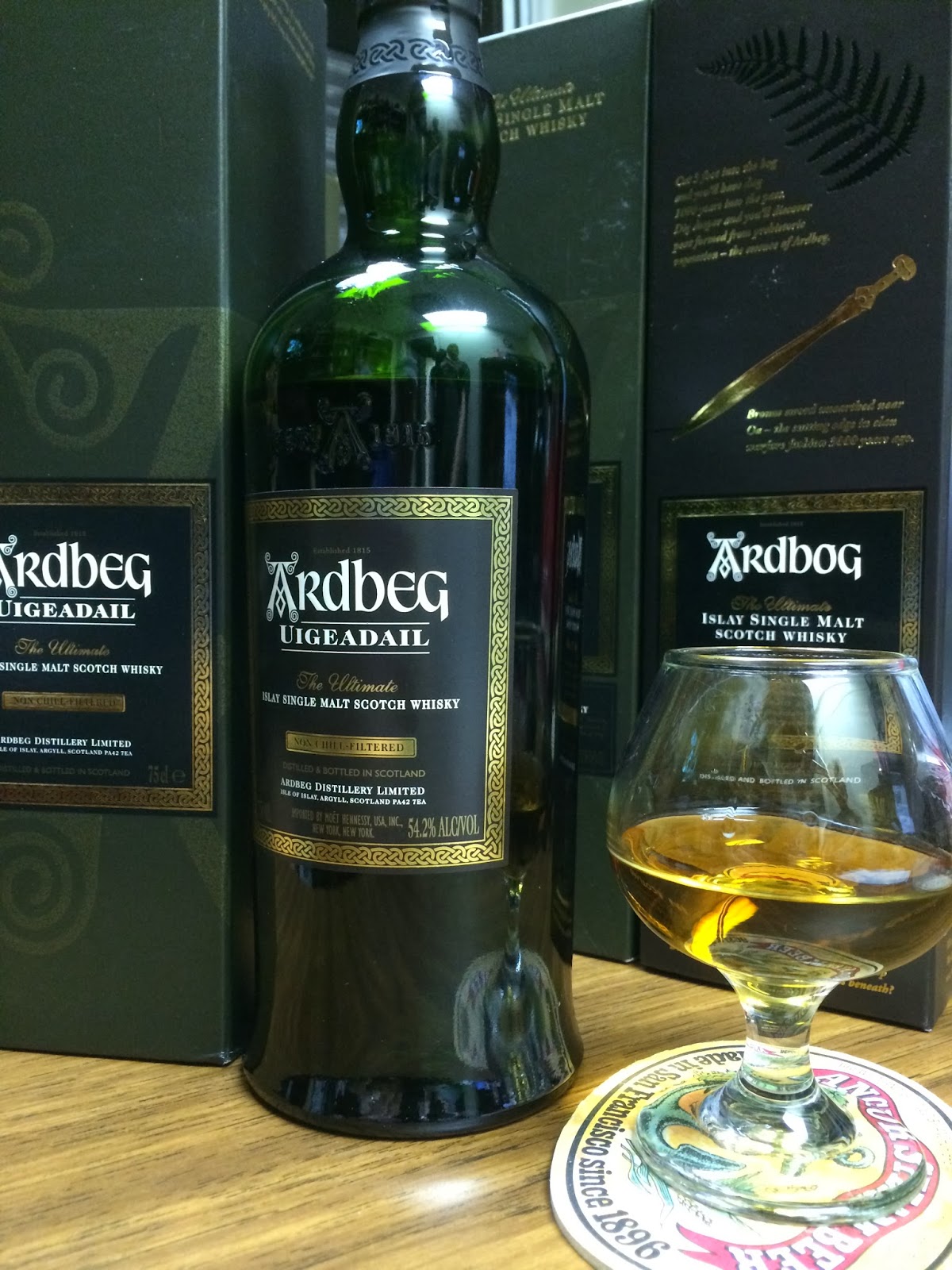 Next up, Ardbeg Corryvreckan, named for the second largest whirlpool in the world, which is near the island of Islay. David said the name comes from Gaelic and literally means "Cauldron of the Speckled Sea," and then proceeded to let us know that there is a speed boat that will take daredevils out and over it. That's when Jorge and Trisha made a pact to make that excursion next time they're both in Scotland.

The aroma was peppery, and you could tell it was going to be potent. Yep, the 57.1% alcohol started out hot and firey! But again, that eased and really nice flavors came through. Dark cherries and great spiciness along with hints of coffee and flowers.

We finished the evening with Ardbeg Ardbog, the distillery's annual special release produced for Ardbog Day, celebrated on June 1 each year. Like Uigeadail, this Scotch is aged in a combination of Bourbon and Sherry casks. However, Ardbog is aged in Manzanilla Sherry casks, which is the main difference. David said this Scotch would be salty and more savory, and he was right. Spicy, a little salty, and peppery on the finish. My palate was worn out by then, but the Scotch was still delicious!

Is that enough for you to sign up to be on the Ardbeg Committee? Well it should be! By doing so, you will join 50,000 others that enjoy these fine Scotches. You will be kept informed about what's going on with the distillery around the world and in your neighborhood. And stay tuned... the Ardbeg Scotch that was sent to the Space Station a few years ago will be returning to Earth later this year! Yeah, seriously! As David put it, "we take our whisky making seriously while not taking ourselves too seriously!"

Thanks for a great interview David and Trisha! 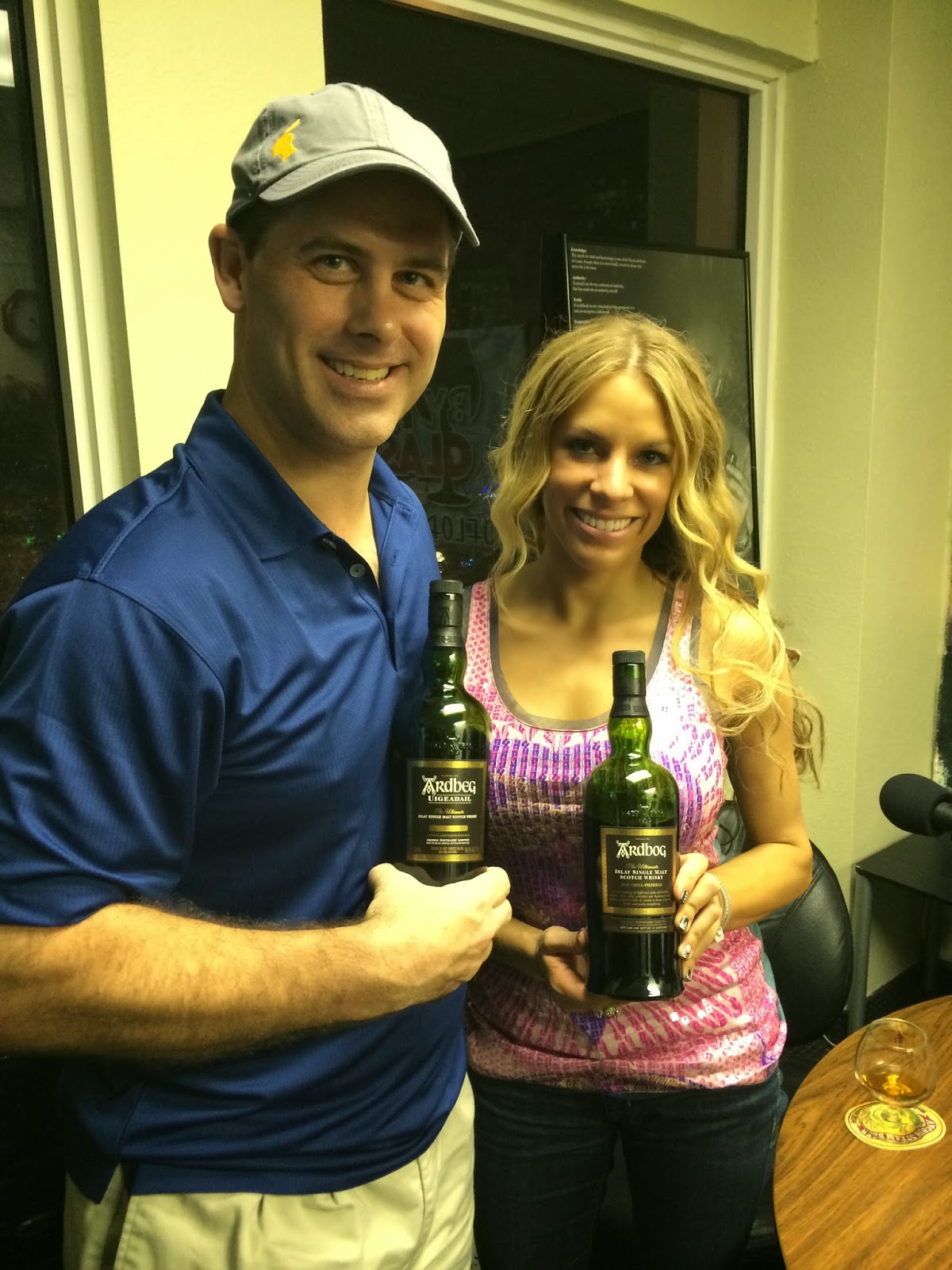 Posted by Distilled Reflections at 11:05 AM